If you have ever dreamt of building your own boat from a kit, then take a look at the 9ft Nutshell. Richard Johnstone-Bryden is given a lesson in how to put the kit together, by Greenway Marine’s Jonathan Greenway and fellow boatbuilder Dean Baldry

The delightful 9ft Nutshell dinghy was designed in 1983 by the Wivenhoe-based boatbuilder, Malcolm Goodwin and has been built under license by Greenway Marine Ltd since March 2003. The Nutshell’s clinker planking, varnished wood and tan lug sail may look traditional, yet she relies on modern techniques for her timeless lines. Unlike conventional wooden clinker dinghies she does not rely on either timbers or stringers as part of her structure, thus simplifying the building process and producing a lightweight, yet very strong hull. The strength usually provided by these components is achieved by using epoxy between the planking. Epoxy is also used to glue all of the other wooden components together, so all references to glue or gluing refer to the use of epoxy rather than conventional wood glue. This style of construction has the added long term benefit of making the sanding and varnishing of the inboard side of the hull’s planking much easier because the timbers and stringer will not be there to get in the way. 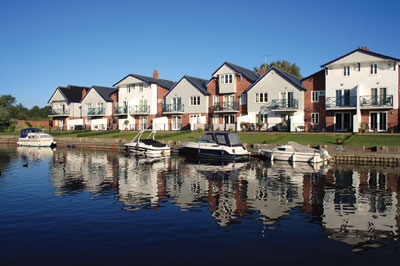 Delightful riverside properties at the head of navigation of the River Chet, South Norfolk, near Greenway Marine's boatyard

The Nutshell dinghy is available either in kit form, half built or ready to use. The kit version is an interesting project that can be tackled by anyone with basic DIY skills. Depending on an individual’s ability and the level of assistance from a second person at key stages, it should be possible to assemble a Nutshell dinghy in about 30-40 hours. The kits consist of virtually everything required to complete the boat, including pre-cut wooden components, screws, nails, epoxy, detailed instructions and fittings. This just leaves the owners to source the woodworking tools, paint and varnish.

Assembling the bottom panel
As will be seen, the hull takes shape quickly, thereby providing the all important encouragement to finish the boat. Building the kit version of the Nutshell dinghy essentially consists of 10 distinct phases, beginning with the assembly of the bottom panel. Robbins Elite marine plywood is used for all of plywood components, including the bottom panel. To prepare the plywood floorboards for fitting, each one is ‘pre-loaded’ with 20mm brass panel pins by hammering them into the wood until they are about to pierce the lower surface of the floorboard. 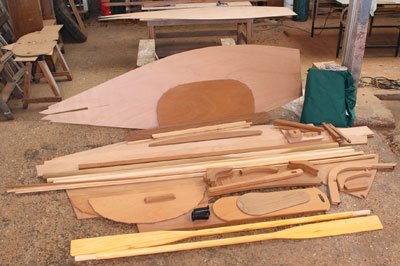 The Nutshell kit may look complicated, but is much easier to build than you might imagine 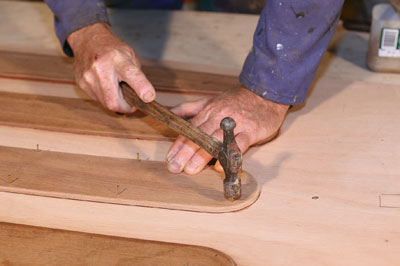 Once epoxy has been applied to the lower face of a floorboard it is carefully lowered into position by placing one end on the bottom panel. Having ensured it is correctly lined up, the floorboard is completely lowered and nailed firmly in place. A cloth dipped in acetone is then used to remove the inevitable surplus epoxy around the edges of each floorboard before it has a chance to cure off. Afterwards, the bottom panel is turned over to enable the protruding panel pins to be knocked flush along the grain of the plywood. 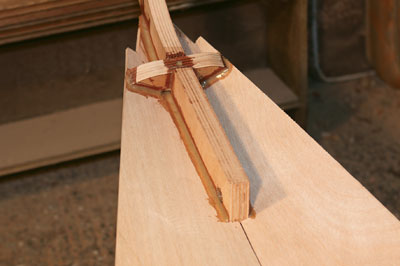 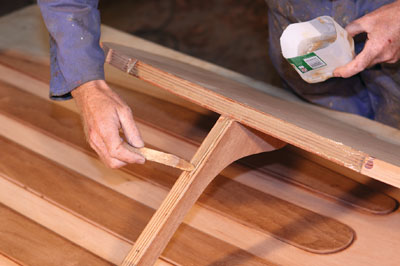 The forward end of the bottom panel effectively acts as the garboard plank, so epoxy is applied to the forefoot cross knee before the bottom panel is screwed to it. A fillet of epoxy is applied to provide additional strength and avoid the prospect of water collecting along the edge of the joint between the keel and bottom panel. The dinghy starts to take shape following the installation of the hardwood/plywood centre board case, the transom and the two bulkheads.

Fitting the planks
The embryonic dinghy is turned over so that the remaining screws can be added to complete the fixing of the bottom panel to the aft bulkhead and transom. A piece of 5mm plywood is used as a gauge to work out the correct height and angle of the ‘step’ on the transom for the first plank in relation to outboard edges of the bottom panel. The process will be repeated prior to fitting the subsequent pairs of planks. A pull saw is used to cut the outboard edge of the new ‘step’ for the first plank on the transom. 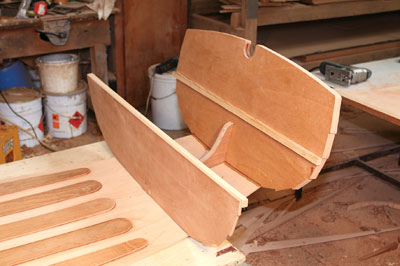 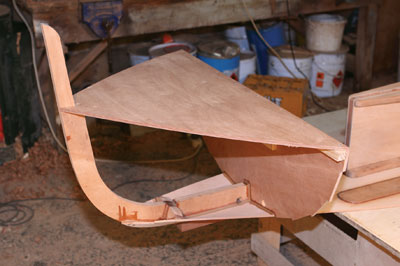 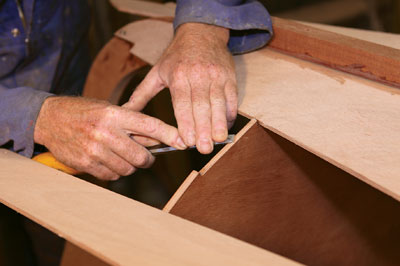 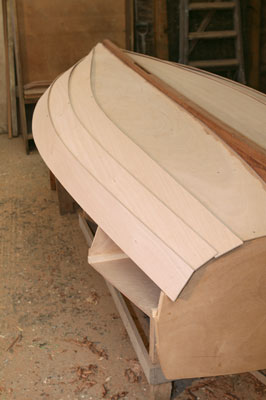 The planks are held in place by a mixture of temporary and permanent fixings, ready for creation of the epoxy fillet joints 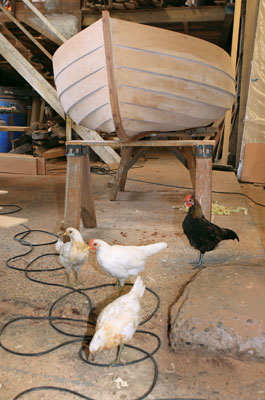 A chisel is then used to fine tune the revised ‘step’ on the transom and forward bulkhead. The fitting process for the first plank begins by bolting it to the bottom panel using the pre-drilled central datum holes on both the panel and the plank. The process is repeated for the subsequent planks, which have also been pre-drilled with central datum holes, by lining up the datum hole on the outer edge of the previously fitted plank under the datum hole on the inner edge of the new plank. The temporary locating nuts and bolts are removed after filleting. Each plank is nailed to the forward bulkhead, aft bulkhead and transom with brass panel pins while the forward end is screwed to the inner stem. The full shape of the dinghy’s hull can be seen for the first time once the last pair of planks is in place.

Epoxy fillet joints
To ensure the planks are held firmly together to create a fair and sweet shape, intermediate screws are added as required. The screws also prevented the hull shape becoming distorted during the application of the epoxy by preserving the required size of the ‘V’ shaped joint between the planks. 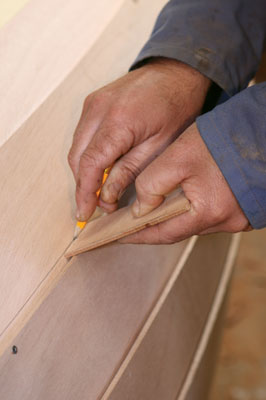 A scribe line to show the limit of the epoxy filler 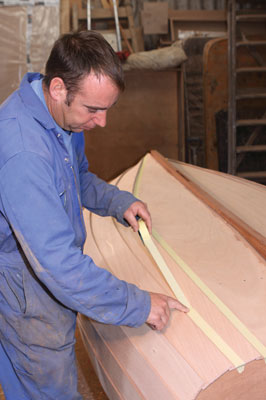 Masking along the pencil lines to keep a clean epoxy line 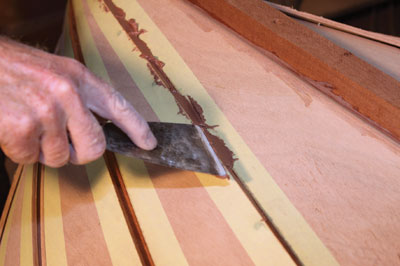 All of the screws are subsequently removed after the epoxy has cured and the holes are filled with epoxy. The width of each fillet joint between the planks is marked out using a 5mm wide dummy stick prior to putting on the masking tape either side. The creation of the fillet began with the application of resin along the V-shaped joint between the planks. A lump of epoxy is then pressed into the joint and left smooth by a 75mm broad knife. Having removed the excess epoxy, a lollypop stick is run along the external edge of the entire joint to leave a smooth finish. Afterwards, the masking tape is removed before the epoxy is cured off to avoid the tape leaving any marks on the plywood.

Fitting out the hull
The hull is subsequently turned over to enable the fitting out work to begin. This phase includes making the two buoyancy tanks and installing the thwart. Assistance is required when the time comes to add the inwales. 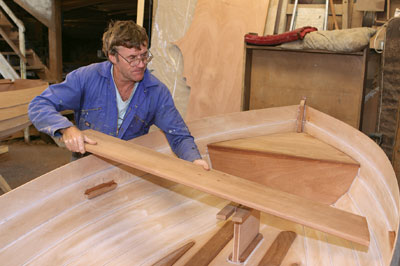 The essential thwart (seat) being fitted in place 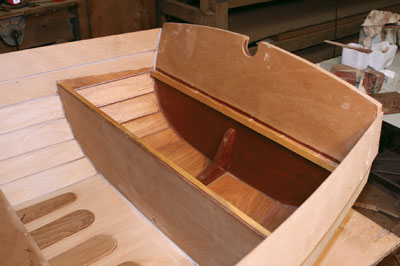 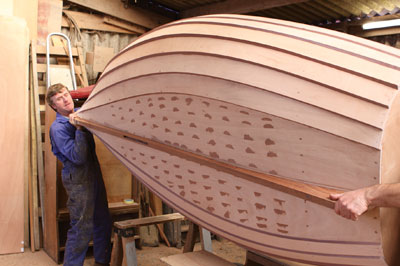 Fortunately, the curve of the Nutshell dinghy’s hull is shallow enough to enable the Columbian pine inwales to be fitted without the need for steaming the wood beforehand. The instructions for the kit provide owners with two options. Firstly, they can glue and screw the inwales in position and avoid the requirement for a large number of cramps by using an additional 48 screws from the stern onwards to bend each inwale into shape. Alternatively, owners can follow Jonathan Greenway’s example by using approximately 20 cramps to hold each inwale in position while the epoxy cures off. However, before the laminated inwales can be fitted they have to be trimmed to size so they are clamped in position and trimmed to length with a saw. The two Columbian pine battens that form the inwales are put on at the same time. Having applied epoxy to the inner face of each wooden batten, both halves of the inwale are secured at the stern before further cramps are applied at appropriate points towards the stem – speed not haste is essential at this stage. Once an initial set of cramps are in position from the stern to the stem, more are added to increase the pressure.

Adding the bilge rails
The woodwork continues with the fitting of the rowlock chocks and rub rails before the dinghy is turned over again for the fitting of the mahogany (Khaya spp.) bilge rails which are glued and screwed in place. Sacrificial keel strips are also added at this stage to provide further protection fore and aft of the keel opening for the centre plate. 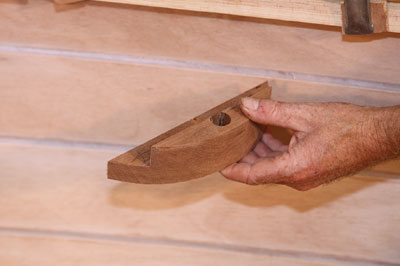 A drilled rowlock chock prior to installation 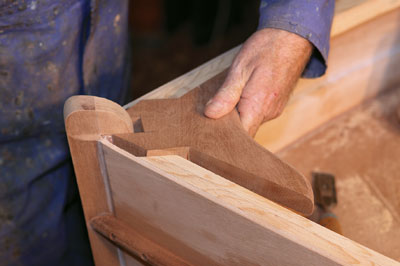 Offering up the breast hook to check the fit

Small mahogany plugs are used to fill the screw holes in the bilge rails. Each one is dipped in epoxy before it is placed in the hole and knocked firmly in place with a hammer. Afterwards a chisel is used to trim them flush with the bilge rail. 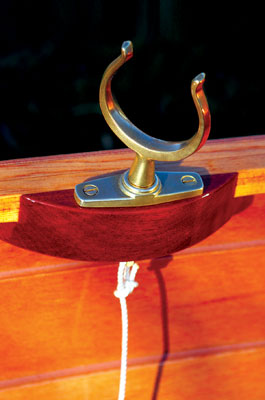 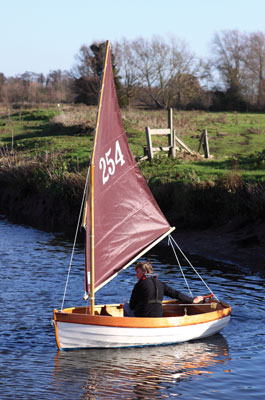 Completing the remaining woodwork
The final phase of interior woodwork includes trimming the stem, fitting the breast hook, quarter knees, thwart knees, the mast step and the pad for the outboard engine. On completion of this work, the Nutshell dinghy is ready to be painted and varnished. Once the paint had been given the chance to harden off for a few days, I was given the chance to see how the featured Nutshell Dinghy handled under sail within the tight confines of the upper River Chet opposite Greenway Marine’s boatyard. Trying out a new dinghy on a very gusty winter’s afternoon on a low spring tide may not be the fairest test, yet she acquitted herself very well. As the wind filled in, Nutshell swiftly picked up momentum while her lifting centre plate and rudder proved very useful along the shallow edges of the navigable channel. Although Nutshell could not show off her full potential at Loddon she did underline her suitability for exploring small creeks. Her lightweight made launching and recovery a very straightforward process.