A very interesting novel could be written about the life of Nelson Cassinger. He’s had a colourful past riddled with stories about biker gangs, drugs, shootings, insurance fraud and fast women. Just as well those stories remain in the past…

Background
Nelson was always handy and creative making the seemingly impossible possible. In his early years he would build custom Harley motorcycles with the long forks and high handle bars. He was an expert at making the baddest looking bikes and was sought after by all the bikers. To make the bikes look even better he got into custom painting the gas tanks and fenders. His work made the cover of biker magazines, however, this life had its dangers and he was happy to leave it behind: “Lucky for me that I got married and moved out west to Las Vegas. Most of my biker friends are no longer around.”
Nelson then began a career in construction work for a local builder. About 18 years ago he met Dale Nish during a demonstration. He was fascinated with the work and later took a woodturning class with Rex Birmingham at Craft Supply in Provo, Utah. For several years he continued to take classes with the likes of Mike Mahoney and Stewart Mortimer. He found that he enjoyed the beauty and feel of the wood. 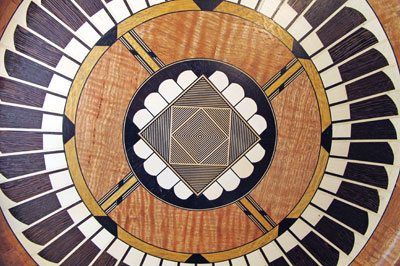 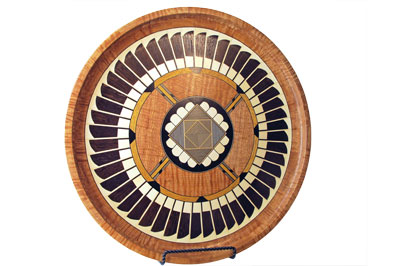 Variations of the ‘Feather Plate’

Inspirations and influences
Nelson has always found the Utah Woodturners Symposium to be a great source of inspiration. “I have been to the Utah Woodturners Symposium 18 times and every time it is a joy to meet the gifted woodworkers and see the new creations. When I saw the segmented work of Ray Allen, I knew what direction I wanted to go in. I love what I do and it keeps me going despite my age and physical ailments.” Both Ray Allen and Dale Nish have influenced his turning work. 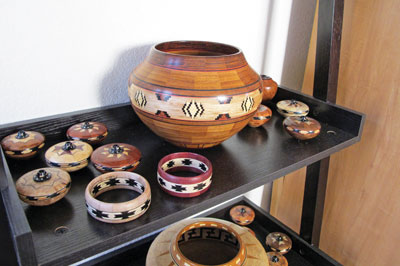 Dealing with emotional issues has been a source of creativity out of necessity. A divorce put Nelson in a depressed state that inspired the piece ‘Lifesaver’. He made ‘Lifesaver’ after a friend asked if he had ever thought of doing a design like the traditional Native American ‘feather plate’. “This got me thinking and evolved into a beautiful work of art.” About six years ago when Nelson found out he has macular degeneration in his eyes it inspired him to make the abstract piece ‘Faces’, which has a focus point on the eyes.
Designs and ideas also come to Nelson in random ways. “Three years ago I was giving a lesson to a young man who asked if he could make a bangle for his girlfriend out of wood. I told him I didn’t see why not. It proved to be quite a challenge. Since then I have created a system using Forstner bits and custom jigs to make the process simple enough for novices to make a beautiful piece that is attractive to wear.” Nelson is constantly coming up with different designs and uses of wood to enhance his unique bangles with colour and movement. 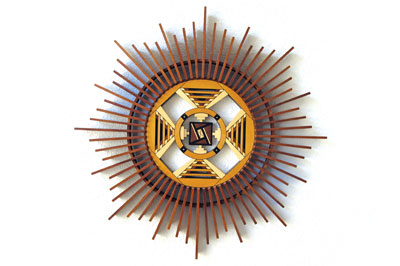 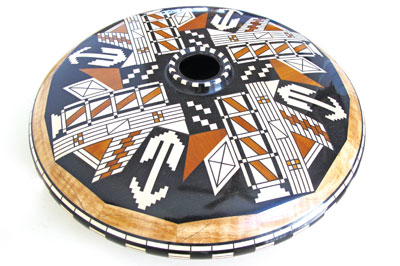 ‘Indian Designs’ hollow form made from ebony, maple and redheart

Turning style
Most of Nelson’s pieces are simple classical forms such as vessels and plates. Where he separates himself from the average turner is in his segmented designs. Over the years his work has evolved from simplistic designs with fewer than 50 pieces for a vessel in a symmetrical pattern to unique and abstract designs with over 3,000 pieces. Nelson describes the style of his work as “Patient, perfect, intricate, delicate, unique, creative, beautiful.” He spends between eight and 10 hours a day in his workshop. His more complicated pieces, such as ‘Lifesaver’ and ‘Faces’ can take over 500 hours to complete, while other projects, including the bangles, can be done in two or three days.


Workshop and tools
Nelson works from a custom-built converted two-car garage with all the amenities of convenience. The style of his work means that he relies on his sander a lot: “When I cut a small intricate piece I have to finish the edges perfectly so that the design is perfect and the glue holds firm. I create special jigs to simplify this process. My Easywood tool has become my favourite tool for general turning.” 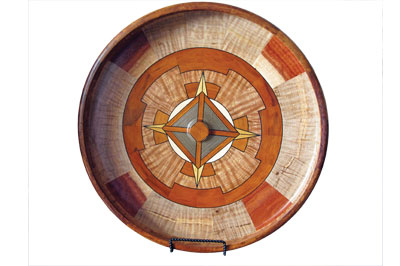 Segmented plate in eucalyptus and redheart

Future plans
When asked where he sees his work heading, Nelson chuckles as he says he is working on a design for his personal urn to put his ashes in! Other plans include “Completing my new designs and creating some never-seen-before looks.” 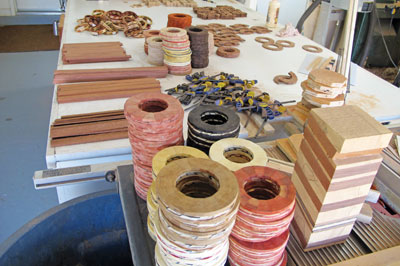 Highs and lows of turning
Teaching the young turners at the Utah Symposium has been a real high for Nelson. He was also very excited when he sold ‘Lifesaver’ for $10,000, few artists can claim such good fortune. His low has been his degenerating eyes and health. When asked what he thinks is the best thing about turning, he says “I keep coming up with new ideas, the possibilities are endless and it excites me every day.” 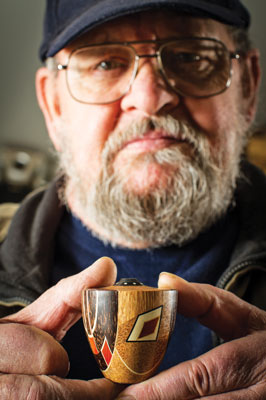 (PHOTOGRAPH BY JARED SEGER. ALL OTHER PHOTOS BY CHRIS PUBLOW, UNLESS OTHERWISE STATED)