Colwin Way started turning in his teenage years when, in 1983, aged 13, he was given the opportunity to undertake work experience. Not fully knowing what he wanted to do, Colwin approached a local woodturner, Geoff Manley, to see if he might be able to do his work experience with him. “I made this decision,” Colwin explains “all because I’d really enjoyed turning a table lamp in woodwork class the previous term at school, which, incidentally, my parents still have.” Geoff quickly agreed and Colwin was to look forward to three weeks of woodturning, which concreted his addiction for the craft and opened his eyes to what’s possible.

First lathe
That same year Geoff and Colwin managed to convince Colwin’s parents to spend £150 on a secondhand Myford ML8 lathe and he set up a workshop in a 6×4ft shed in his backyard. Colwin finished school in 1985 completely addicted to woodturning, but not even thinking of a career in it. He asked his uncle John – who was the cox of Lyme Regis lifeboat and someone he looked up to as some type of ‘superhero’ – if he could work for him. As well as being part of the lifeboat crew, John had his own painting and decorating company. His uncle happily agreed and for the next three years Colwin worked with his team. However, his real passion was still woodturning, which took up most of his spare time. In 1988 Colwin was encouraged by his parents to go back and see Geoff Manley as they could see how keen he was in his all-consuming hobby. Geoff came back to Colwin to offer an apprenticeship which, of course, he jumped at straight away. This was the start of five incredible years for Colwin. “In fact,” he tells us, “the first week was one of the most useful weeks of my career so far.” 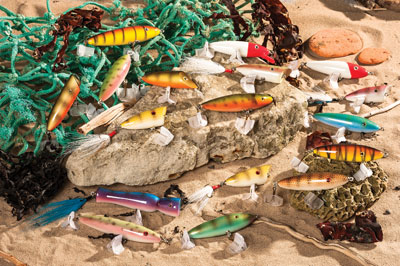 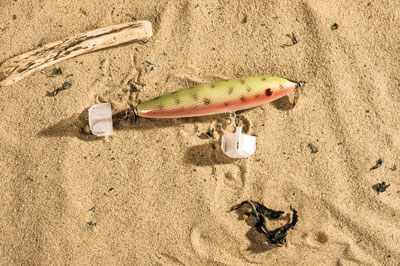 Experience
During his apprenticeship, Colwin got to experience using all kinds of timbers, from ziricote (Cordia dodecandra), partridge wood (Andira inermis), snakewood (Brosimum guianense), purpleheart (Peltogyne spp.), bloodwood (Pterocarpus angolensis) and thuya burr (Tetraclinis articulata). After his five-year apprenticeship with Geoff finished, the pair both decided it was time he set up on his own. So in 1993, at the age of 23, in the shed in his parents’ backyard with a Tyme Avon lathe that Geoff bought him, Colwin set up his own ‘turning’ business.  However, Colwin and his partner soon wanted a place of their own, which would mean a new workshop, so the next part of his adventure started. 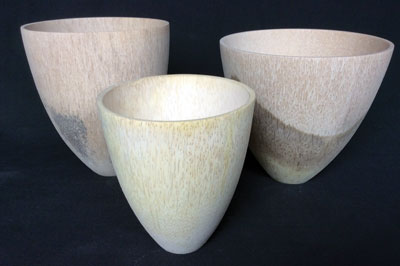 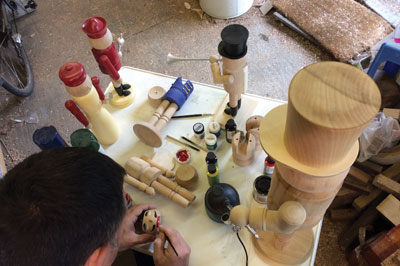 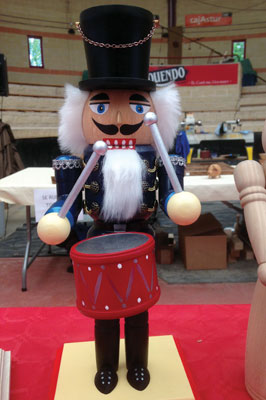 Moving on
The couple moved into a ‘quirky’  flat which was a converted stable and they heard that a local landowner was looking for a farm manager and someone to help manage the game estate, so Colwin went for the position and started the following week. After a few weeks, he was able to move into the farm workshop and continue his turning business from there. “I loved it!” Colwin tells us, “I looked after the animals, checked the farm and did all my duties then went into the workshop to turn. In my time at the farm I was able to continue my learning and went on several courses including, chainsaw felling, crosscut and maintenance and hedge laying.” Colwin also had the opportunity to plant soft and hardwoods and manage the woodlands around the farm, by nursery cropping with Christmas trees, thinning and controlling the intrusive vegetation, like ivy. He explains: “I worked with a group of travelling ‘woodsmen’ who lived and worked in the wood. They used heavy horses to selectively take certain trees to minimise damage to the wood, which they then made into charcoal.” Outside of his work on the farm, Colwin was given another opportunity through someone he had taught woodturning to many years previously, at Axminster Tools and Machinery. Colwin was asked to run courses and manage the newly opened woodturning centre at the shop close to their original in Chard Street, in Axminster. “I couldn’t believe what I was being asked,” he tells us. “This was another dream job!” Of course, he took the job and in 1997 started his long association with Axminster, who he is working for to this day.

Turning style
Colwin looks to his turning style, saying how it changes frequently, depending on his current inspiration: “I think this is due to my training and turning life, as one day could be production turning salad bowls, the next jewellery,” he explains. “But also ‘teaching’ focuses on technique, where style becomes less apparent.” If the woodturner had to come up with one word to describe his style, it would be ‘fun’ – German nutcrackers, fishing lures and space ships are all pieces he is working on at the moment. He wants to show people there is more to turning than just bowls and lamps – especially the young, who Colwin feels are very quickly bored of turning. So, he is hoping to encourage his young audience to use their imagination. Colwin also makes a lot of what he would call ‘normal’ things. These are things that pay the bills, such as stair and chair spindles, fruit, bowls and lamps, but he is always working on the more unusual demonstration pieces. “I consider myself as an entertainer as well as a teacher trainer,” he explains. “So what I make represents this. I still need to sell my work as well as put on a demonstration and talk, entertain and educate people.” 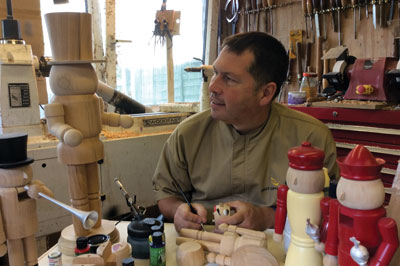 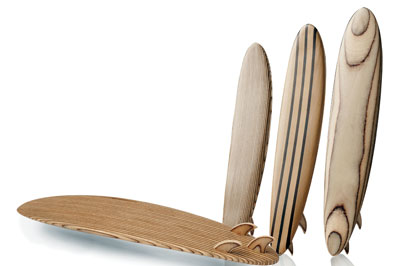 Inspiration
“I take a lot of inspiration from the people around me, the place I live and hobbies I have. My wife and two sons inspire my turning greatly, certainly on the fun side, and that was how I started making German-style nutcrackers,” he explains. Colwin was encouraged by his son to make a ‘soldier nutcracker’ for his teacher one Christmas, just after he had created a batch of Christmas tree decorations for his friends. Colwin has plenty of time to think and find inspiration, thanks to his other hobbies. He tells us: “My hobbies of cycling, surfing and fishing continually give me ‘time’ to think! Anyone who’s done any of these will understand what I mean when I say you have an almost meditational moment of peace, where creative thoughts flourish!” Living in Lyme Regis – in the heart of the ‘Jurassic Coast’ – Colwin is in a place of constant inspiration. He finds it through its geology, with the mixture of sea and countryside and its dramatic views. Just a walk along the beach can give Colwin hundreds of moments of inspiration. 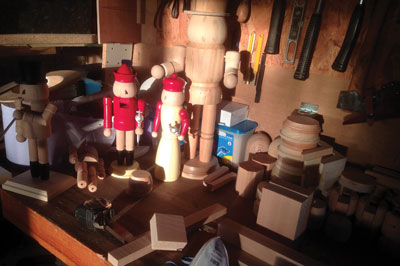 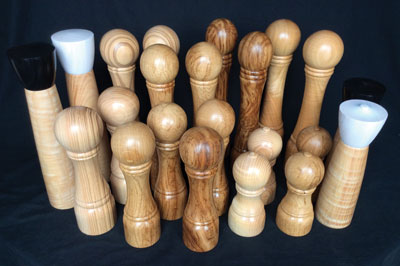 Influence
“My greatest influence in woodturning has been Geoff Manley,” he tells us. “He shaped me into the turner I am and gave me so many projects in so many different materials and would not let me make excuses.” He tells us that Geoff had complete faith in Colwin’s ability and encouraged him to try everything. “I have lots of turning friends but two in particular are a constant part of my life,” he says. “Jason Breach, who many will know from the wonderful boxes he turns, demonstrates around the world but I’ve known him from the start. We first met when I was an apprentice with Geoff all those years ago. Our turning lives ran parallel right up to this day as we work together at the Axminster workshops.” Colwin and Jason are constantly looking at improving their teaching and Jason is a constant source of encouragement and an honest critic for Colwin, saying: “I can always count on Jason for support.” Nick Agar is another long-term friend and even though Colwin doesn’t get to see him too often, the pair catch up often over the phone: “Nick has a very supportive nature and, like Jason, is incredibly encouraging. Nick has done my turning career wonders. He’s gone out of his way to put me in the spotlight and put my name forward as a demonstrator turner but more than this, he’s become a close personal friend and adviser to myself and family.” Workshop Colwin describes his workshop as: “more of a ‘den’, really”. It holds the things that he uses continually, such as his lathe, tools, bikes and fishing gear. “On the one hand,” he says, “it is set up to generate income; on the other, it’s a bit of a man cave and like any den, is bursting at the seams!” We asked him what tool he could not do without, to which he says: “I would really struggle without my skew chisels – I have about five of them. Most important, is a 10mm tapered carbon steel skew, which I’ve had since my apprenticeship. This tool just feels right to me, as if it was made for me.”

Typical day
Colwin feels very lucky with what his work days consists of, saying: “I don’t have a typical day but some of the more common days could consist of entertaining a visiting woodturning club and giving them the Axminster experience.” He could also include teaching a course in his work day, which could be anything from a group of complete beginners taking their first woodturning steps to a group of students making a Windsor chair each, as well as demonstrating in store or privately for a woodturning club. Colwin will also regularly undertake wood preparation for demonstrations or courses – this could consist of a day in the cutting room or a visit to the timber yard.

Highs and lows
“It’s difficult to say about my highs and lows,” Colwin tells us about his career. “I get many highs when people finish a course – I love the look on their faces, as cheesy as it sounds!” He also mentions a great feeling when at the end of a demo, people have liked what they’ve seen, or when someone says ‘you were the reason I started turning’. All of these things make him feel like he’s having an impact and making a difference. A continual and personal high for Colwin also comes from being asked to demonstrate. Lows are much easier to identify, as he comments: “For me, it means having to say ‘goodbye’ to old friends when they pass.” For Colwin, the best thing about turning is the diversity and not just in projects, but the people. “The fact that it doesn’t matter if you’re rich or poor, young or old, educated or not,” he says. “You can release your creative thoughts and within an hour you can have produced something.”

Future
Colwin describes himself as very much a family man, which will always have an impact on travelling, but he says: “I’m also very much part of Axminster Tools and Machinery, where many of my close friends are, but I would love to continue travelling and experience turning cultures in other countries with my family.” He would also like to continue his teaching and give people the confidence to try this wonderful hobby for themselves.