Much of my carving inspiration comes from historic houses and this project was inspired by a carved marble chimneypiece dating from the early 1700s when the Baroque style was gradually giving way to the Rococo. I have adapted it for a woodcarving project recreating the full gilded magnificence of Baroque. The Baroque style – see sidebar overleaf – was one of the high points in the history of carved ornament, notable for the richness and depth of its carved elements. Its classical acanthus swirls not only curl and swirl from top to bottom and side to side, but also from background to foreground. Although this panel is only 50mm-thick, the forward curls, like breaking waves, make it appear thicker. Baroque also made abundant use of naturalistic fruit and flowers and the naturalism of this grape bunch serves as a reminder that the great Grinling Gibbons was active and influential in this period. I have called this a garland, but it could equally be called a cresting and be put above a mirror, a picture frame or a door. Gilding it to a ‘distressed antique’ standard with imitation gold leaf is really quite a cheap and simple process well within the capabilities of anyone who can carve. If you are a little shy of displaying such grand decoration in your home, don’t be constrained by modesty. Throw off your inhibitions and create a little piece of Baroque grandeur to enjoy in your own humble palace. The marble chimney piece that inspired this project was at Clandon Park, Surrey and since I wrote this article, the house has suffered a devastating fire that has destroyed most of the interiors. The National Trust has launched an appeal for funds for a massive restoration project, see www.nationaltrust.org.uk.

Using the pattern
You can enlarge the pattern to any size that suits you, but I made mine 457mm long. The drawing has a grid equivalent to 25mm when enlarged to full-size. If you use a scanner or digital camera to copy it into a computer, you can crop the picture into two parts, each 11 squares long – including overlaps – and print each of these onto a full page of A4 – or the US standard sheet – so they all come out at the same 25mm scale. The acanthus swirls are symmetrical each side of the centreline, but the grape bunch isn’t.

Baroque style
The Baroque style dominated art and architecture in Europe from the mid-1600s to the early 1700s. It was derived from Roman Classicism, but in a highly ornate and exaggerated form. Carved ornament abounded in wood and stone and was notable for the apparent depth of the elements. It made much use of the classical acanthus swirl, frequently combined with naturalistic fruit and flowers. Grapes were commonly featured in dining rooms as a symbol of Bacchus, the Roman god of wine. Woodcarvings were often in dark woods such as walnut (Juglans nigra) but most frequently in gilded limewood or pine (Pinus sylvestris). The style reached its zenith in Britain with grand buildings, such as Blenheim Palace and Castle Howard. 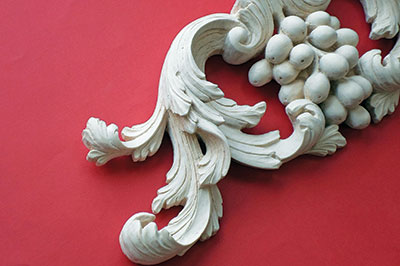 The essence of acanthus
The classical acanthus swirl is one of the mainstays of decorative carving, but it is not easy to capture the fluidity that turns a solid block of wood into what appears to be a living organism. The swirl must continually be on the move, twisting and turning upwards, downwards and sideways like a hyperactive eel. All the curves must be smooth – an awkward angle or a straight line will spoil the carving. You must create half-unfurled fronds, which roll over on themselves and learn the subtleties of the shallow broader leaves. Tiny little touches at the leaf ends, like the little half-moon incisions and the downward twist of the gouge at a leaf tip, can make a big difference to the appearance. And you must accentuate the curves with grooves and vein lines that flow all the way along a leaf or stem, never losing that continuous smooth line.

Top tips
1. If a carving is to be displayed above eye level, hang it up at that level  frequently during carving to check the appearance, especially when roughing out. The three-dimensional appearance can vary from different angles, and the underside of undercut parts can become visible

The Clandon Park appeal
Clandon Park is an 18th-century Palladian mansion in West Clandon just outside Guildford, Surrey. It has been a National Trust property since 1956 and is a Grade I listed building. It was built by a Venetian architect for Lord Onslow in the 1720s and as one of the country’s most complete examples of a Palladian mansion, featured original stucco ceilings and marble fireplaces. The house was refurbished during the 1960s to house a collection of 18th-century furniture and porcelain. Sadly, on Wednesday 29 April, 2015, a fire broke out at Clandon. Everyone was evacuated from the building but the fire caused significant damage, effectively leaving the house a shell. A well-rehearsed multi-agency salvage operation was carried out, but salvage is limited in so severe a fire.
Clandon Park is now completely closed to the public and will remain so for the foreseeable future. You can donate to the Clandon Park appeal by calling 03448 001 895 or via the website: www.nationaltrust.org.uk/clandon-park. 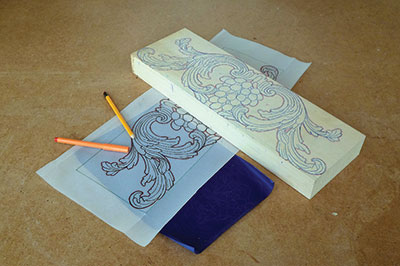 STEP 1: The first step is to take a piece of lime measuring 457 × 152 × 50mm. You can then make a full-size copy of the drawing and trace the pattern onto the wood using carbon paper. Draw the cutting lines in red so you don’t get lost while cutting 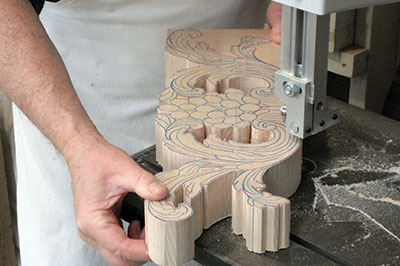 STEP 2: The next step is to cut out the internal voids with a jigsaw, but be aware that the blade may flex a little in the turns. Cut around the outside with a bandsaw, if you have one; this will help to avoid the flexing problem

Roughing out the levels 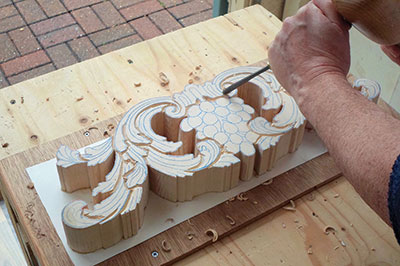 STEP 3: Glue the wood to a backing board with a piece of card in between – I find sanding sealer makes the best glue. The purpose of roughing out is to form the general shape before carving the detail. There is no point putting good detail on a bad shape. Start by using a ‘V’-tool to separate the main elements of the carving from the maze of lines 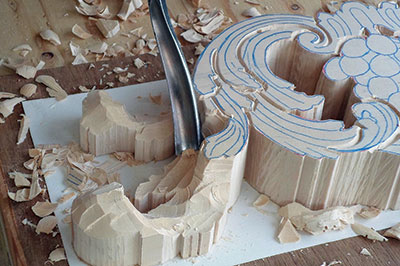 STEP 4: Now lower the level of the two outer swirls at each end of the garland. Use a curved gouge to carve away the surplus wood until the ‘ball’ at the lower far end is about 40mm-thick and the lowest parts down to 20mm thick. These will be taken down further later 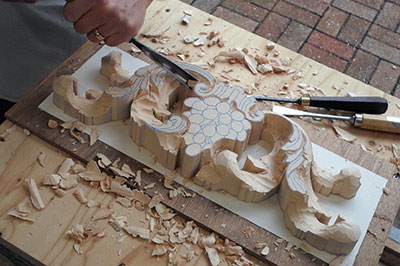 STEP 5: You can now repeat the same process on the swirls either side
of the grapes 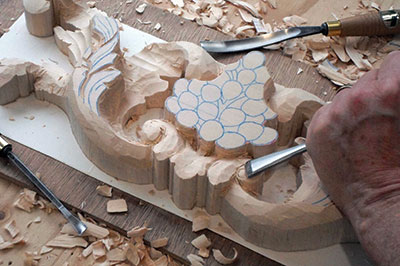 STEP 6: You can then start to slope the central crest down into the grape bunch and shape both branches of the swirls into the crest. Don’t disturb the leaves in the middle of each swirl just yet as they provide a reference point for the detail carving later

Top tips
2. When carving symmetrical elements, it is easier to keep the opposite sides the same if you complete each stage on both sides before moving on to the next stage. Each side will be a reverse image of the other side, which you will find is more difficult than it sounds. Your natural right- or left-handedness will tend to affect how each side turns out. 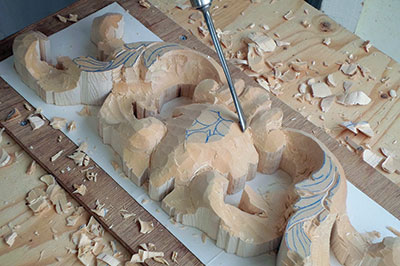 STEP 7: You can then begin to form the general shape of the grape bunch so the grapes can be arranged naturally when separated later. Leave some tracing lines showing in the middle for reference in the detail carving 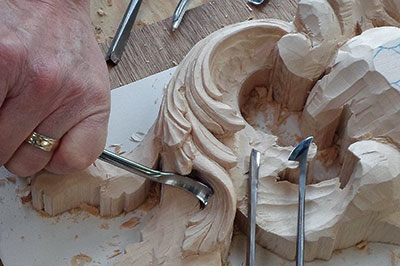 STEP 8: The middle of the swirl, where we left the tracing lines – shown in step 6 – is our starting point for carving the detail. Separate the leaves and carve the deep twist, which brings one leaf down to the lower level. You can then proceed to shape the other leaves into the main stem and carve grooves and vein lines back along the stem. Once complete, you can then repeat the process on the other half of the carving 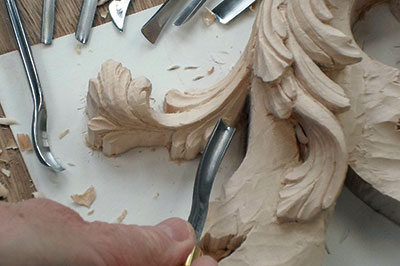 STEP 9: The next step is to follow on with the small ‘frond’ in the top corner. The swirl must emerge smoothly from the main stem, sweep downwards in the middle and finish with a flourish as the leaf curls up and over 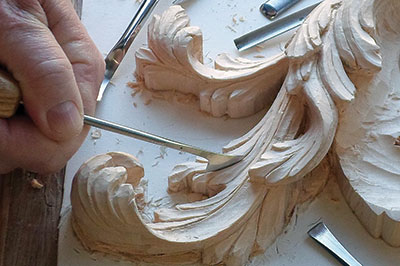 STEP 10: The lower outer swirl springs from the main branch and flows out towards the far corner, ending in a half-unfurled frond. Hollow this out and carve the vein lines so they curl round and under the frond. All the leaves and stems must have vein lines and shallow grooves, which flow smoothly back to the main branch 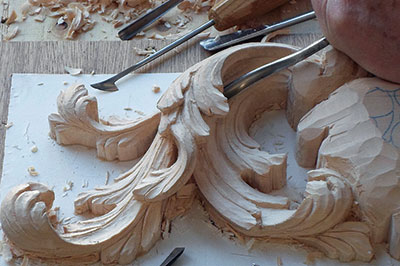 STEP 11: To carve the central swirls either side of the grapes you must hollow under the upper leaves and create flowing lines right round from the top to the half-unfurled frond at the bottom. Undercut the upper leaf where it curls down to the outer swirl 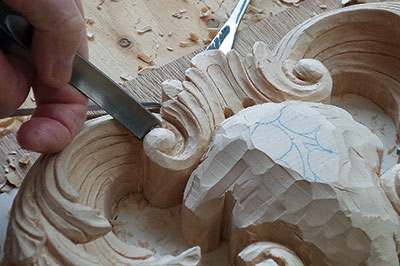 STEP 12: Now we just have to carve the central crest on the garland and the volutes either side, which flow into the acanthus branches. Carve the top of the grape stem – carefully, as it runs across the grain – and cut out the hollows either side which will later be cut right through 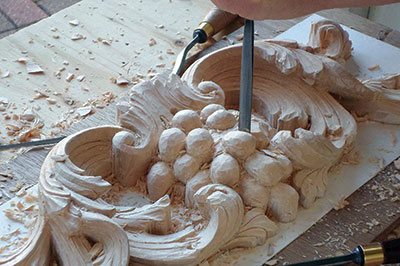 STEP 13: Start the grape bunch by arranging the individual grapes into layers. The grapes must be quite widely spaced and hang downwards and outwards from a stem, which will be visible in places but has to be imagined throughout the bunch 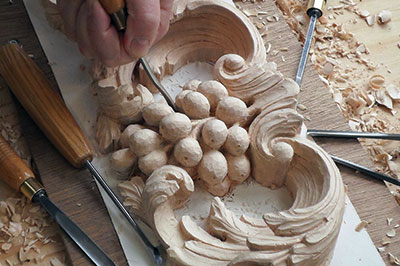 STEP 14: Now refine each grape into a smooth ovoid and carefully carve the narrow stems, which show just below the top layer – these mostly run across the grain. Use small tools to excavate deeply between the grapes 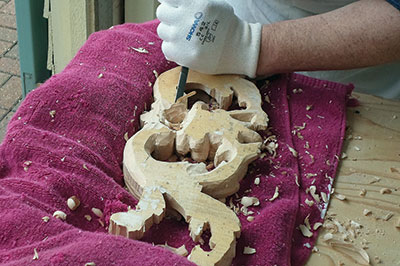 STEP 15: Prise the carving off the board by sliding a flat knife under the card. Fix a couple of timbers to the bench to make a corner to push into and place the carving face down on a very soft surface. Use a skew chisel to pare away the edges and open out the gaps 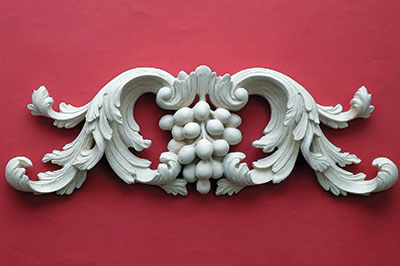 STEP 16: Smooth all the surfaces with fine abrasives, taking care not to dull the detail. The grapes need a bit more sanding to remove all the facets. Seal the wood with sanding sealer, then give it a final light sanding with very fine abrasive. The carving should look like this 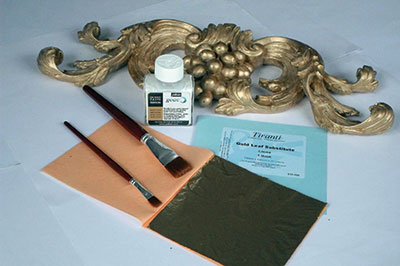 STEP 17: Undercoat the whole carving with a gold lacquer to provide a base for the gilding. Get some imitation gold leaf, sold at most art stores in books of 25 sheets. You will also need gilding size, a brush to put it on with and a soft brush to press down the leaf 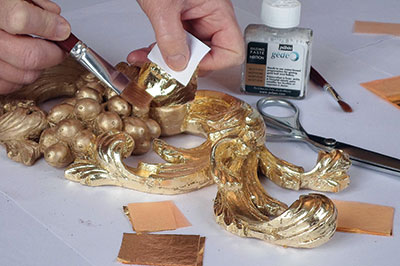 STEP 18: Apply the size on top of the gold lacquer, working a section at a time and leave it about 15 minutes to become dry, but slightly tacky. Cut some gold leaves into pieces about 50 × 25mm while still in the backing papers. Gently pick up a piece using a folded strip of paper and place it carefully onto the size. Press it down with a soft brush and brush away the surplus. Repeat over the whole carving. The imitation gold leaf needs a sealer to stop it tarnishing. I use French polish to give it an ‘antique gold’ finish. Be sure to brush it on thinly, smoothly and quickly 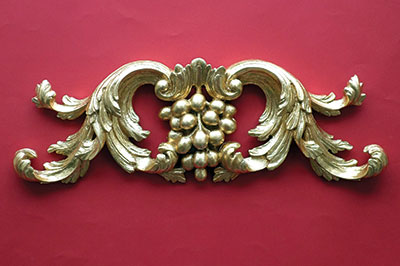 STEP 19: The carving is now completed and just needs hanging