As I unwrapped the unexpected parcel brought by post I recalled the phone conversation that took place some months before: “It’s my husband’s birthday and he wants a house sign – it’s called ‘Farthings’ and can I send you the wood for it?” Time went by and I’d put the matter to the back of my mind, but now the timber had arrived it was time to make a start on this commissioned project. Using a selection of very few carving tools, the raised letter techniques shown for my ‘Farthings’ sign can be used to personalise carved signs of any design, for both indoor and outdoor use.

Tools used:
* Carbon paper for copying your design onto the wood
* No.3 gouges with a selection of widths
* Bevel chisels with appropriate widths
* 6mm 60° degree V-tool
* Dispensable No.3 gouge for use as a scraper
* Convex headed punch and hammer

Wood:
Oak (Quercus robur) blank: 280 × 50mm, although you can choose a different timber to suit your needs 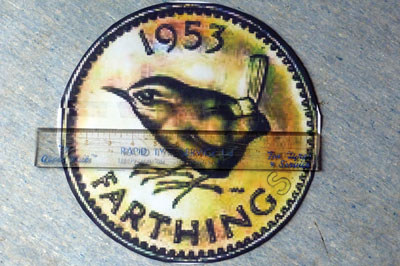 STEP 1: The timber I used was an oak (Quercus robur) turning blank, measuring approximately 280mm diameter X 50mm thick. Other suitable timbers could be elm (Ulmus procera), robinia (Robinia pseudoacacia) or teak (Tectona grandis). I photographed a farthing from my coin collection and then enlarged the photo to the size of the blank. Using a ruler to position it, the additional ‘S’ was drawn in place on the illustration 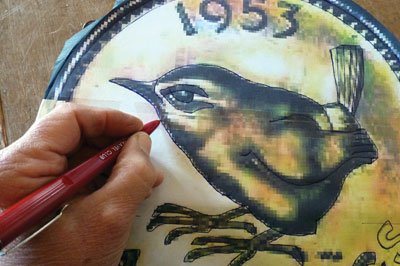 STEP 2: Align the illustration with the horizontal grain of the blank and place carbon paper beneath it. Using a biro, transfer the outlines onto the surface of the wood 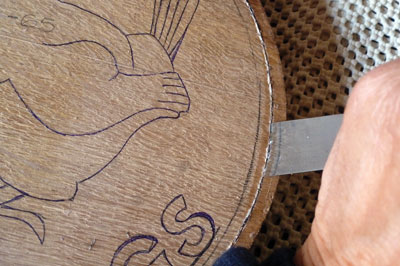 STEP 3: Using a No.3 gouge matching the inner curve of the border, make consecutive vertical cuts around the curve 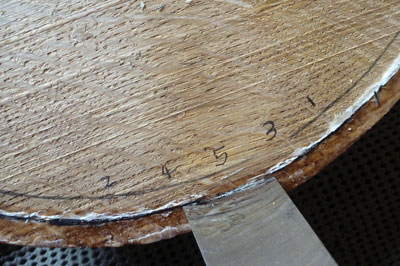 STEP 4: At the top and bottom of the curve where the grain lies horizontally, make alternate cuts from each side; this will stop the wood splitting 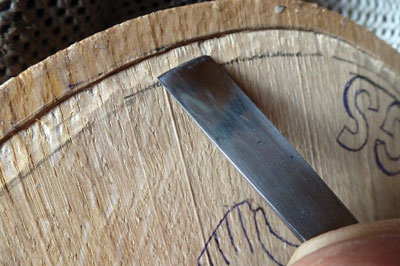 STEP 5: Using the No.3 gouge bevel down and working towards the vertical cuts made around its inner curve, cut a ‘V’ channel round the inside of the border 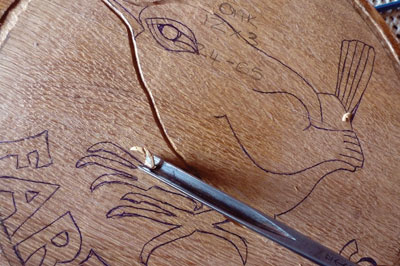 STEP 6: The wren and letters were outlined with ‘V’ channels using a V-tool 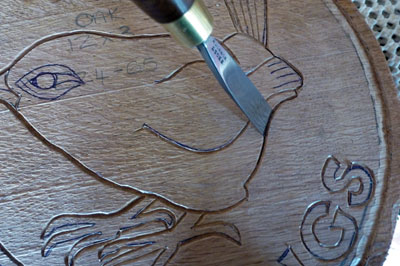 STEP 7: Resting the No.3 gouge/s against the side of the ‘V’ channel and turning them to match the curves, make outward cuts around the outlines of the wren and each of the letters 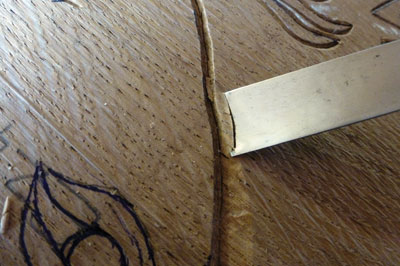 STEP 8: Using the No.3 gouge bevel down, deepen and widen the ‘V’ channels round the wren and the letters 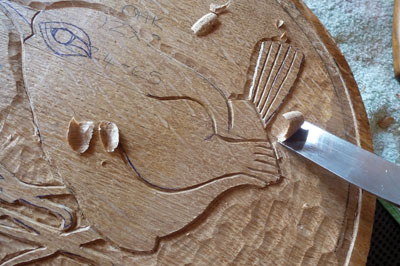 STEP 9: To lower the background, divide the area between two channels and cut towards the nearer one. Start by cutting close up it, making successive cuts until halfway, then turn the carving and repeat from the opposite channel, so reducing the background and the areas between each letter. Round over the edges of the bird’s feet and toes, tidy the edges of each letter and smooth the surface between each 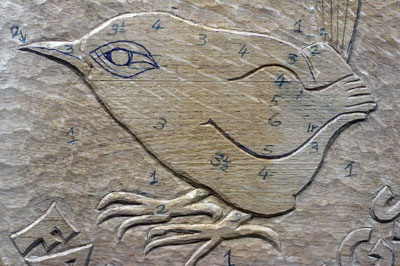 STEP 10: Number the different levels on the wren according to its horizontal and vertical contours. This is the order in which to work. The background, No.1, is deepest – you have already made a start here; No.2 is the next furthest away and so on, rising up to the highest area on the wing, nearest to you, shown as No.6. First reduce the areas numbered 2, i.e. the tip of the beak, the furthermost leg and the far side of the base of the tail; then slightly less reduction for the No.3 areas; and so on thus to the highest area on the wing, No.6 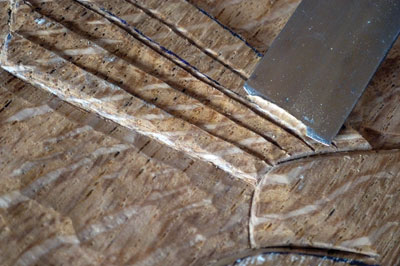 STEP 11: Layer the tail feathers by cutting along each one with a chisel or No.3 gouge, then remove the adjacent surface on the left so they overlap each other like roof tiles 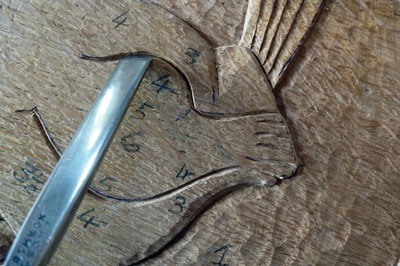 STEP 12: With the tool handle held over it and turning the No.3 gouge to match its curves, cut around the outline of the wing 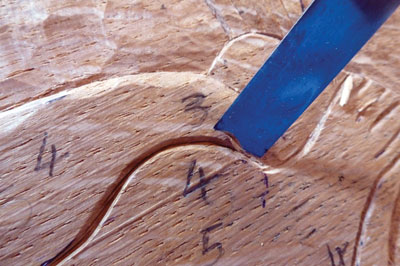 STEP 13: Using the tool bevel down, meet up with the outlining cuts, relieve the edge of the wing and reduce its adjacent surface 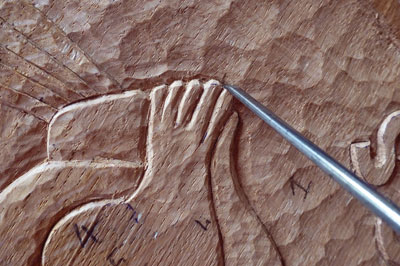 STEP 14: Use shallow cuts to reduce the ends of the wing feathers, then invert the No.3 gouge and round their ends. Pare gentle hollows behind the head and under the throat, blending them into the rest of the body. Taper the beak to a sharp point, then using a 3mm No.3 gouge with opposing cuts to make narrow ‘V’ channels, mark the separation between beak and head, and the upper and the lower mandibles. With the 3mm No.3 gouge inverted, cut around the outline of the eye. As shown in step 4, at the top and bottom, make alternate cuts from each side to avoid damaging the eye 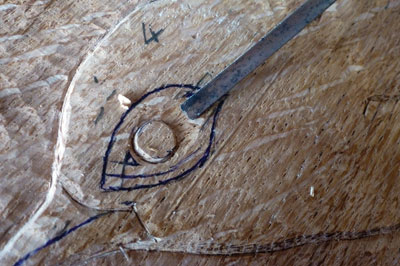 STEP 15: Cutting towards the eye from each side, extend the hollow to shape the wren’s distinctive eye socket. Round over the outer edge of the eye so it is completely convex, then deepen the tiny triangle in front of it with the corner of the 3mm No.3 gouge 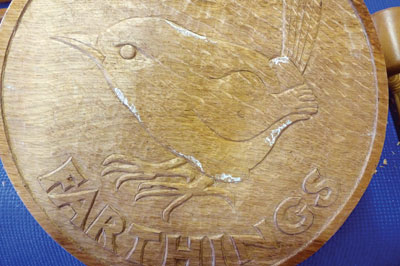 STEP 16: View the carving from a distance and mark the edges to be undercut. With the No.3 gouge tilted, gently cut downwards, angling it under the edge. Cutting towards it, carefully reduce the adjacent surface of the background to create a shadow along the edge 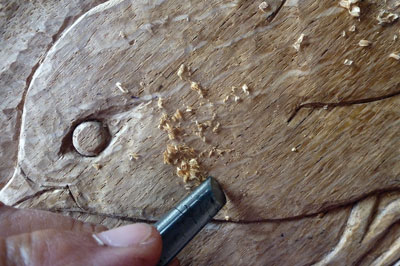 STEP 17: Erase all pencil marks and pare away any undesirable deep cuts, then smooth the surface of the letters and wren using a scraper. In confined areas, the edge of an old No.3 gouge can be used as a scraper. The background can be left tooled as a contrast 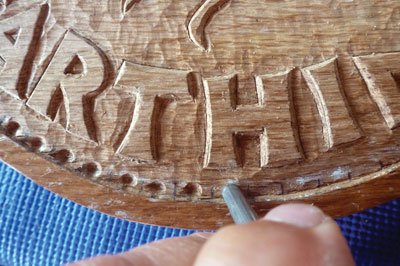 STEP 18: Around the rim of a farthing coin there are raised pips – these were represented by indents made with a round-ended punch, having drawn them in place beforehand 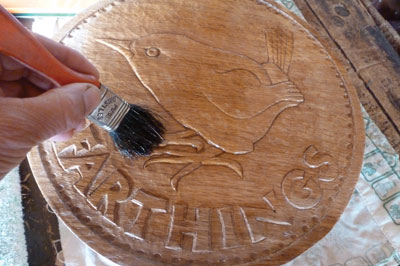 STEP 19: When the carving is finished, give the sign several coats of Danish oil 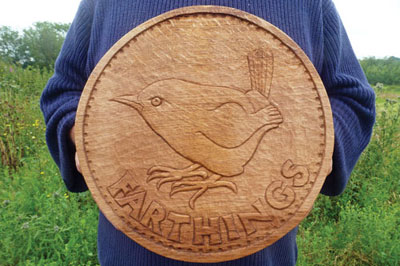