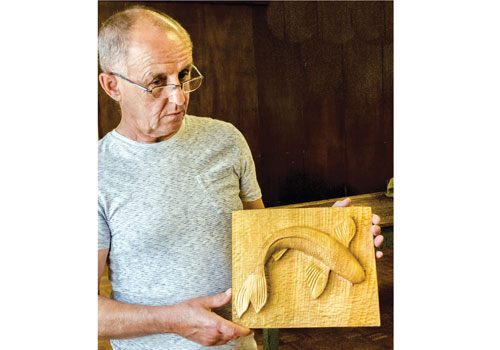 As always, a great time was had by all. The carvings by the Rockingham Forest group were on display in nearby Elton village hall and were superb. The fun carving competition for the AGM was to carve something from a piece of wood measuring 25 x 25 x 150mm and there were two prizes for this event, won by Stan Kimm and Bob Breakwell. Bob managed to get 10 elephants carved on his piece!

The World War I memorial exhibition

The World War I memorial exhibition is still travelling the country and is an ongoing success. It seems that this exhibition will continue to generate interest for some time and have a grand finale in 2018. 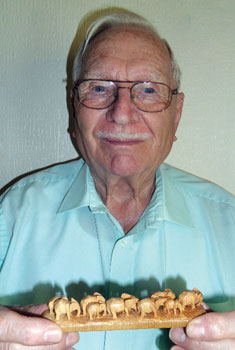 There will be two themes for national carving for the coming year: the first is to carve 'Love Spoons' for a similar type of exhibition to the World War I project; the second is a member competition to carve something from a birch (Betula pendula) egg measuring 45 x 65mm. Early indications show a strong uptake for this competition. Attention is also focusing on 2017 as this will be the BWA's 30th anniversary. This obviously needs to be a milestone event and one very ambitious theme will be to attempt to complete a 'One Tree' event. The idea is to procure a tree, have it planked and sawn, then distributed to members to carve who will then return their carving to a given location to be on display.

Within the carving world there are a lot of people taking up the hobby for the first time and we are seeing new clubs forming. AnyoneÂ who has formed a group will agree it is not an easy task; however, it is a most rewarding experience and well worth the effort with life-long friendships being forged along the way. These friendships can and do spread worldwide and the BWA is an excellent vehicle to achieve this. Jim Ainsley from the Cleveland Region has completed his carving of a carp taken from a book by Chris Pye. Jim has modified it to include his own likes. This carving is only the second piece Jim has ever done.Â There are new standards being set all the time, many by newcomers to the craft and long may it continue.

Tagged in:  News and Events , BWA