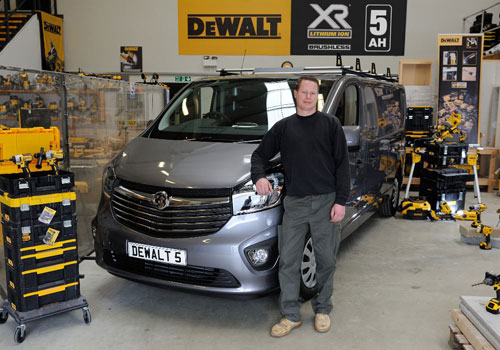 To celebrate the launch of its new XR Li-Ion 5Ah battery, leading power tool brand, DEWALT hosted a series of events at stockists across the UK and Ireland offering customers the first opportunity to try and purchase tools from its new range. Customers who bought 5AH products on the day were entered into a draw to win the top prize of a Vauxhall Vivaro van worth over Â£15,000. The winner has today been announced as Jason Weldon, an independent carpenter and joiner from Chessington, Surrey.

Winner Jason Weldon says: "I'm thrilled to have won the top prize from DEWALT's series of 5Ah events. Running out of power during an important job is always frustrating. This new technology means that I'll no longer have to focus on how much power I have left and can concentrate on the job in hand."

Mark Douglas, Brand Marketing Manager at DEWALT adds: "Our series of events were hugely successful and allowed us to offer our consumers the opportunity to try out our new tools first-hand ahead of their official launch."

Tagged in:  News and Events , DeWALT