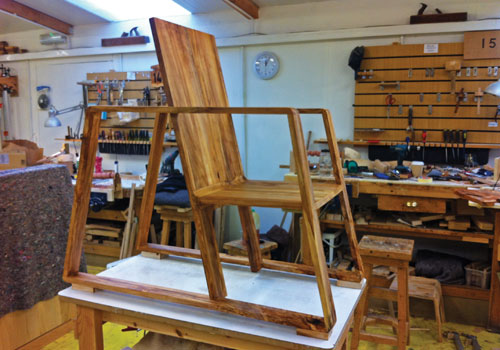 It was an advertisement that became an icon of pop culture, transforming a humble audio tape from Japanese electronics company Maxell into a global phenomenon. To a theme of Wagner's 'Ride of the Valkyries', a reclining man in a Le Corbusier chair is seen being blown backwards by the power of sound coming from speakers in front of him. In the advertisement, entitled 'Blown Away Guy', his hair, necktie and dry martini are all buffeted backwards by the volume of sound. Now, an American woodworker studying at the renowned Chippendale International School of Furniture in Scotland has recreated the famous chair in spalted cherry (Prunus serotina) for a new generation who may only dimly know what an audio cassette tape looks like. He's also recreated the advertisement.

The reinvented chair, finished with linseed oil and carefully polished, was designed and made in three months by Isaac Thompson, aged 24, from Orange County, California, who is a sculpture graduate of Bates College, Maine. "The chair's design was inspired by the exaggerated lines and movement of the Maxell advertisement. I liked the idea of sliding into the chair, reaching for my martini, pressing play and listening to my favourite music," he says.

The Chippendale International School of Furniture was founded in 1985 and is this year celebrating its 30th birthday with a major UK Best Business Award. Each year, it takes in a small number of students of all ages from around the world for a range of short courses or a 30-week professional course. "I came across the Chippendale School while I was working for a sculptor in Brooklyn, New York," said Isaac. For as long as I can remember, I have been surrounded by creative minds. My grandmother was an artist, both my grandfathers were woodworkers in middle America, so I felt an inherent pull towards furniture and design. The Chippendale School was the perfect combination of artistic freedom and practicality for me."

Tagged in:  News and Events