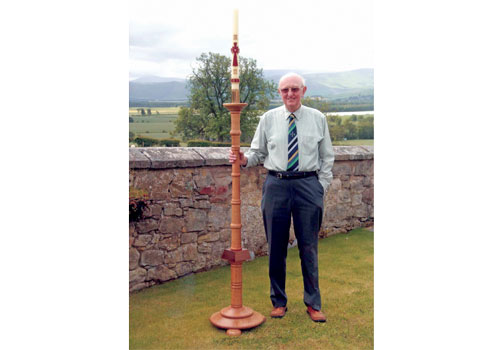 Andrew Stockdale was once told by a local woodworker he would never be able to handle making turned table lamps. Andrew has since gone beyond proving them wrong, making so far, Â£51,000 from his turnings. And this is all since retirement, giving all of the money raised to various local charities. Andrew's primary chosen charities are the Royal Infirmary of Edinburgh, Heart Disease Research Trust Cardiac Appeal and Coldstream Health Centre Endowment Fund. Absolutely every turning Andrew does goes towards making money for the charities. It has got to a point now when Andrew gets so many commissions, he doesn't even need to advertise!

Having started off his woodworking career as a joiner, and after retirement having bought a lathe, Andrew has estimated he can raise around Â£8,000 a year from selling his turnings. Selling his standard lamps at around Â£150 and his bowls for between Â£25-Â£50, Andrew makes roughly Â£100 for each four items sold. We asked Andrew why he chose the charities he did and he told us how he had had major heart surgery 19 years ago, when the usual life expectancy after such an operation is 10 years. He tells us: "They have looked after me so well ever since, I just want to give back." Looking toward raising money for the Coldstream Health Centre, Andrew told us that seven years ago he had a relapse and a speedy referral from the Health Centre to the cardiac unit, once again, saved his life. Again, Andrew is giving back to a charity that has helped him through tough times. It's not just these two charities that Andrew has raised money for. He has also sold his turnings for a local cancer research charity and Macmillan Cancer Support. Recently, he has raised Â£2,000 to help fund a new set of doors for Branxton Church. The doors commemorate the 500th anniversary of the historic Battle of Flodden, which took place near the church. We hope to hear more about his turning sales. Congratulations, Andrew, on your wonderful and inspirational achievement.