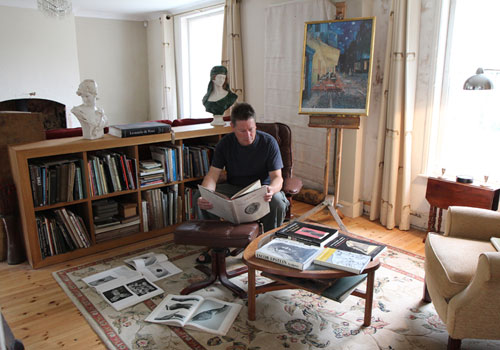 Here, we get to know the author of Letter Carving: Techniques And Projects To Hone Your Skills, Andy Hibberd with a quick Q&A session...

Woodworkers Institute: Tell us a bit about yourself and the work you do

Andy Hibberd: I enjoy living in a rural area with the option of the buzz of a large city to visit half an hour away. Friends, family, your recreational environment, can all have a positive influence on your work and for me that is the case. I trained at a great art school in London and have acquired friends with similar interests, passions and particular skills. We often bounce ideas off each other which can help if the creative juices are not flowing. For the past few years commission work interspersed with writing and a heavy involvement in the letter carving process have been my main focus. Creating the projects for the book over the last couple of years has been a particularly enjoyable experience.

WI: What inspires you on a daily basis?

AH: Inspiration comes in many forms as mentioned previously. Having a deadline has a knack of focusing your attention if inspiration is lacking. Also having a routine, not too rigid, can quickly re-engage you with the work. Sometimes it can be as simple as honing a chisel and thinking about what you wish to achieve in the next few hours. Other times just a walk round the garden with a cup of coffee in your hand can re-engage you. I tend to prefer quiet moments if I'm struggling, but very occasionally, when nothing really works I will just take on another task.

WI: Which designers are you most inspired by?

AH: Obviously the work of Grinling Gibbons, particularly his less opulent but equally fantastic strap work woodcarving in St Paul's Cathedral. I have an eclectic taste though, with favourites such as Jacob Epstein, Giacometti, Gaudier Brzeska, Barbara Hepworth, Tillman Riemenschneider and, of course, David Holgate. Apart from that, pretty much any work displayed in the British Museum and Victoria and Albert Museum are among my favourites.

WI: What is the most unusual thing you've ever made?

AH: I suppose the stone creature 'Deco Gecko'. This was based on a slightly strange looking chameleon carved on a medieval pew end in a church in Norfolk. Although the original woodcarving was brilliantly executed, it presumably had never been seen in life by the carver. It had gills, fur and claws as part of its anatomy and was pleasingly strange. It resonated with me so I did my own take on it.

WI: Can you tell us about any major carving disasters you've had?

AH: In truth, I can't think of any. The occasional piece of wood or stone that decides it doesn't want to be part of the design anymore, can be frustrating and add extra time. It does not usually turn into a major problem though.

WI: If you could be anything else in the world, other than a designer, what would you be?

AH: This is a difficult question as I already work in a relatively unrestricted working environment and have freedom of choices that others may not necessarily have. This means attractive ideas and projects can be undertaken without having to really justify myself. Creating is what I enjoy, it can encompass your whole existence and once experienced there is no turning back. Additional wealth could not hurt as long as it did not expunge the need to create.

WI: Do you have any grand plans for the future we should keep an eye out for?

AH: I have in mind a slight change of direction as figurative carving and sculpture beckon me. Experimenting with other media while re-familiarising myself with favourites such as clay and plasterwork are exciting prospects. Block printmaking is of particular interest and an area that I will be visiting again shortly. I also have several large pieces of limestone, and half hidden pieces of interesting timber waiting to be rediscovered and used. Another book will hopefully emerge from this melting pot of ideas so watch this space! 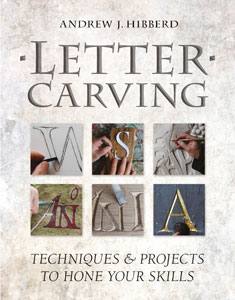