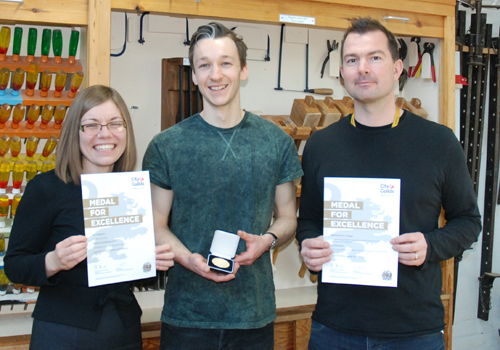 Jan, 27, from Birmingham was recognised for his outstanding work towards his Level 3 Furniture Design and Making at Warwickshire College's Leamington centre. Jan is now automatically shortlisted for the City & Guilds Group coveted national awards - the Lion Awards. Winners will be announced at a prestigious ceremony at London's Roundhouse on 5 June. He will also compete for the People's Choice award - the only category voted for by the public. Voting takes place through the dedicated Lion Awards website: lionawards.cityandguilds.com until 19 May. City & Guilds Group has awarded Medals for Excellence for over 100 years to celebrate exceptional talent amongst both individuals and tutors. This year saw an impressive 101 medals awarded, both in the UK and internationally.

Jan, who completed his qualification with Warwickshire College last year, is now studying for a degree at Rycotewood Furniture Centre in Oxfordshire. During his time at the college, he also designed a spectacular 10 metre 'squid bench' for Coombe Country Park near Coventry, and won the college's Andrew Varah Award for the outstanding furniture-making student as well as the prestigious Alan Peters Award for Excellence at the Cheltenham Celebration of Craftsmanship and Design. He returned to the college to be presented with the award by Rebecca Hollamby from City and Guilds.

Speaking about his success, Jan said: "It's really fantastic to be presented with this Medal for Excellence - a real honour. I can't imagine doing the degree course I am now, without the experience and support I had at Warwickshire College."