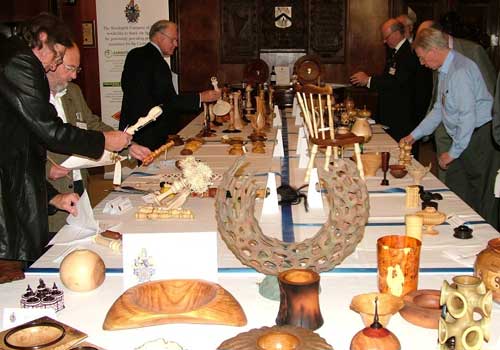 'The Square Mile's energy to transform lives': The theme for the competition reflects Fiona's belief that the City of London has the energy and talent for innovation to meet the momentous challenges that face society - it has 'The Energy to Transform Lives'

Criteria for inclusion of work in the competition:

1. The piece should be of a size suitable for display on a shelf or tabletop.

2. The piece must be primarily created on the lathe, but you are free to incorporate materials other than wood and/or use other techniques.

3. Interpretation of the theme is left to the turner. The piece will be judged for the quality of work and how it relates to the theme. It must be new, original and specifically created for the competition.

4. The turner should have fun making it. There will be a special prize for the best entry by a school child.

The City of London is a separate jurisdiction within London. The reference to 'square mile' is a reference to the approximate area of the walled Roman City. It was not square.

In 12th century the City of London was granted the right, privilege and responsibility of governing itself separately. Elected annually, the Lord Mayor is head of the City of London and ambassador for all UK-based financial and professional services. The city is world renown for Insurance, shipping and the law. The city is also famous for churches, archeology, music, art and livery companies.

This competition is open to any turner resident in Great Britain and is for a themed piece, namely: 'Energy for Life in the Square Mile'

There will be a separate award for school children.

Tagged in:  News and Events , The Worshipful Company of Turners