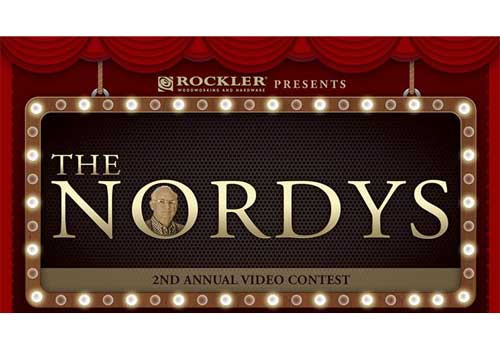 Rockler Woodworking and Hardware has introduced its second annual Nordys Woodworking Video Contest, referred to simply as The Nordys, named after Rockler's founder, Nordy Rockler. The contest will begin on 6 January, 2014 with an announcement and call for entries on Rockler's Facebook page. Each year, the contest is centered around a theme, and the theme for 2014 is to 'Inspire the Future Generation of Woodworkers'.

The Grand Prize in the Academy Choice category is an Ultimate Router Table Package valued at over $1,200 (£734), complete with HPL Router Table and Stand, Ready2Rout Fence, Porter Cable 690LR Router, casters, and a bundle of accessories. Top prize in the People's Choice category is an Ultimate Finishing Package complete with Quart and Gallon size Mixing Mate Paint Lids, an HVLP Sprayer, Bench Cookie Work Grippers and a bundle of accessories. The Academy runner up will receive a Turning Prize Pack, and the People's Choice runner up wins a Gluing Prize Pack. Nordys entrants are encouraged to use their creativity to create video submissions lasting two minutes or less that show woodworking in ways that will get younger viewers interested in the craft of woodworking.

Entries will be accepted between January 6 and February 22, 2014. The videos will be posted on YouTube for public viewing and on the Rockler Facebook page, which is where voting will occur. The videos will also be reviewed by a panel of Rockler judges.

Voting will end 27 February and winners will be announced the week of 4 March, 2014.