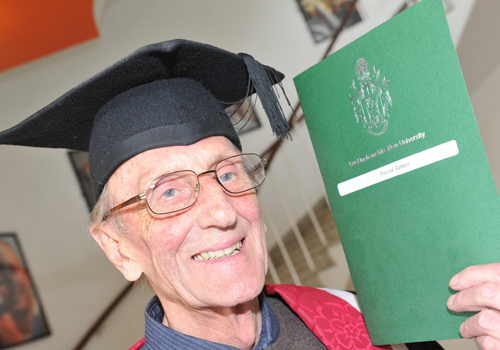 Artisan craftsman, academic and author, David James, has been bestowed with the status of Honorary Fellow by Buckinghamshire New University in recognition of his standing in the local, national and international furniture trade and for his long service within the industry.

David, who lives in Princes Risborough, Buckinghamshire, was amongst a distinguished gathering of individuals being honoured at Bucks New University's graduation ceremonies held at the Wycombe Swan Theatre in High Wycombe.

He said: "I wish to thank the University and I am delighted with this opportunity to accept an honorary fellowship."

David began his career in the furniture industry in 1954 and after 12 years joined Bucks New University, then called the High Wycombe College of Technology and Art, as a lecturer. In 1981, David was promoted to senior lecturer, continuing in that role for a further 19 years before retiring in 2000.

In 1986, David was awarded Honorary Membership of the City and Guilds of London Institute. The Institute, commonly known as City & Guilds, is a leading UK vocational education organisation offering more than 500 qualifications, which span all levels from basic skills to the highest standards of professional achievement including honours, master's and doctorate levels equivalent.

Between 1990 and 2009, David wrote and published seven books on upholstery subjects. Four of his textbooks: Upholstery a Complete Course; Upholstery Techniques and Projects; Upholstery a Beginners Guide; and Upholstery Beginners Techniques, are still used throughout furniture industry education today.

Prof Ruth Farwell, Vice Chancellor of Bucks New University, said: "We are very pleased that David has accepted our invitation to receive an honorary award. David is amongst a celebrated group of honorary awardees, who are chosen in recognition of their outstanding achievements in their fields, and because they are an inspiration to our graduating students."