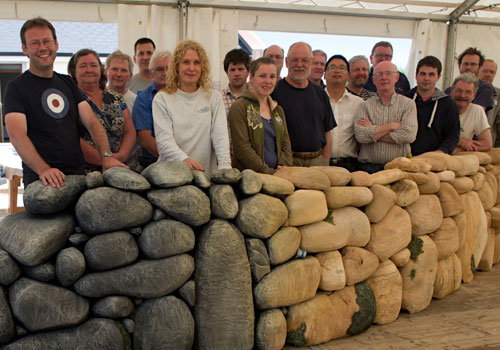 Together with Arbortech and Flexcut, Axminster has given support to a project in Ireland, undertaken by 22 wood artists from all over the globe, in the form of tools and accessories for the artists to use. The project took shape at Glenn Lucas's Woodturning Study Centre in Bagenalstown, Co Carlow.

The artists - including carvers, turners, furniture makers and sculptors - came together for one week to create a 'Story Wall' for the Carlow Arts Festival, which took place from 7-16 June and the 'Wall' is now installed in the Visual Centre for Contemporary Art in Carlow.

The idea of bringing together all the artists with their different disciplines to create a â'Story Wall' was conceived by Terry Martin, wood writer, artist and curator from Brisbane, Australia. Having been to Ireland many times, Terry had been struck by the number and beauty of the walls throughout the Irish countryside and the stories behind their making. This inspired him to come up with the idea of making a sculptural piece based on an Irish stone wall. 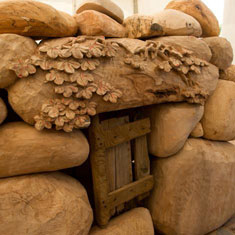 The real story behind this wall is the collaboration between the 22 artists involved under the artistic direction of Terry Martin. They shared skills, stories and ideas on what colour, texture and shape the wall would be. The artists worked together on all aspects of the wall - at a macro level to shape it as a whole and at a micro level for the small details.

Many skills were used in making the wall, including carving, woodturning and sculpting. The wall is 6.5m long and made of individual wooden 'stones'. Each stone has been cut with a chainsaw and a bandsaw, carved to create a round finish using the Arbortechs, sanded and sandblasted. Many of the artists then carved on the surface with the Flexcut tools so that some stones resembled ancient rock art or to suggest realistic vegetation. "On one part of the wall is a little door which you can open carefully. The artists made this and behind it is a treasure - a traditional Chinese coin carved which has a Celtic horse and an Asian dragon," commented Cornelia McCarthy project manager and wife of Glenn Lucas.

The 'Wall' will continue to be on display at the Centre until 7 September allowing many thousands of visitors to see the sculpture. The Arts Festival organisers are then planning to place the work in other galleries across Ireland.

Most of the funding for the project came from the Carlow Arts Festival. Other support came from the Crafts Council of Ireland, the International Wood Culture Society, Arbortech, Axminster Tool Centre, Flexcut, Golden Paints and some local outlets such as the Carpentry Store (Co Kildare) and Ronaynes (Co Tipperary). The wood came from the grounds of the Office of Public Works in Ireland, an organisation similar to the National Trust. All the artists gave their time freely. 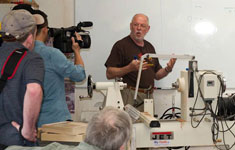 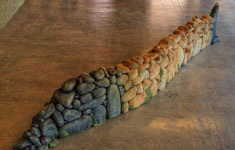 Carlow Arts Festival (Eigse) has committed to focus on and celebrate a different non-traditional arts discipline each year. Wood Art is the focus for 2013.

1. Artists behind the finished 'Wall'

4. Stones in the making, made using an Arbortech