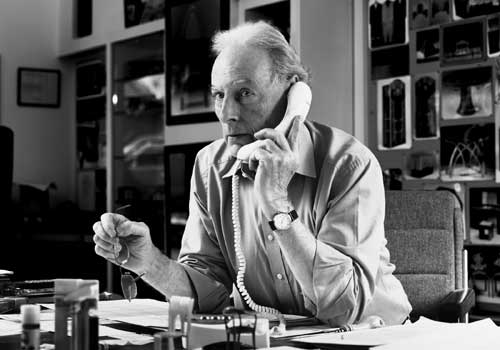 The Furniture Makers' Company is delighted to announce that the Andrew Varah Bursary has been established to be awarded to promising young designers/makers.

The bursary of £3,500, to be awarded annually, will enable a young designer/maker to attend the Edward Barnsley Educational Trust in Hampshire for 12 months to learn the techniques of advanced furniture making and furniture design. The student will be under the direction of James Ryan, who has been Designer Manager of Barnsley for over ten years. He has been responsible for the recent resurgence of the workshop, set up over 90 years ago by Edward Barnsley, into one of the leading UK designer/maker workshops.

The Barnsley Workshop exhibits annually at Masterpiece Exhibition in Chelsea, and also this year are at the Goldsmiths' Contemporary Fair at Somerset House.

James Ryan explained that the bursary will be awarded to a candidate, who will already have shown aptitude and a determination to make a career of furniture making. He or she will be "someone who already shown great promise but requires an advanced level of intensive training to realise their full potential as a skilled designer maker."

The award will initially run at Barnsley for three years.

Andrew Varah, who died young aged 67 in July 2012, was one of the most eminent designers/makers of his generation. He was wonderfully inventive - including becoming the only maker in the world to make infinity models - as well as being a skilled maker of the most complex pieces of furniture.

He was the first designer/maker to be invited to be Chairman of the Bespoke Guild Mark Committee of the Furniture Makers' Company, where he was outstandingly successful. In 2009 he was elected to the Court, and in 2012 was made an Honorary Liveryman - the highest accolade the Furniture Makers can bestow.

Andrew is greatly missed by all who knew him but it is hoped that his Bursary will inspire talented young designers/makers.

An announcement of the winner of the inaugural Andrew Varah Bursary will be made in due course.

Tagged in:  The Andrew Varah Bursary , The Furniture Makers