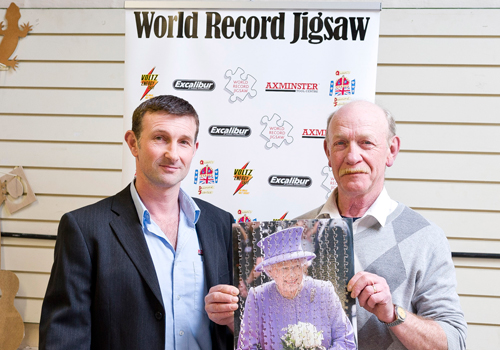 After several months in the planning, Weymouth craftsman, Dave Evans, has now begun his pursuit of a Guinness World Record and is attempting to create the world's largest hand-cut jigsaw puzzle. Dave has managed to obtain sponsorship from Axminster Tool Centre, who are supplying him with an Excalibur scroll saw to cut the puzzle, and the Excalibur brand itself, which is owned by Canadian company, General International.

The puzzle will depict scenes from the Queen's Diamond Jubilee and be a montage of 60 images taken throughout the celebrations in 2012. The entire puzzle, which when complete will measure approximately 19ft x 8ft and be made up of 40,000 pieces, should take several weeks to cut and the final stages of cutting will be witnessed by a Guinness World Record adjudicator. 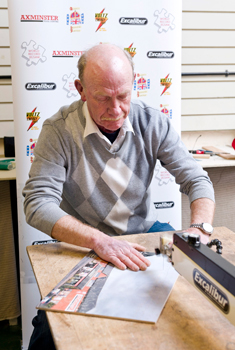 Specialist jigsaw puzzle maker, Dave said: "I'm one of the few people who are professionally trained to hand cut jigsaws and I wanted to leave a legacy, so I thought maybe I could leave a giant jigsaw. When it's finished it will be completely assembled and a monster piece of work - I'm hoping it will be displayed for public exhibition and it could possibly be auctioned off to raise money for charity. I couldn't have done this without the support of Axminster Tool Centre and the Excalibur saw."

Throughout March members of the public, schools, colleges and craft enthusiasts are invited to watch Dave as he undertakes this challenge at Jigsaw Workshop on Brewer's Quay in Weymouth. Ahead of him lies 200 hours of cutting time.