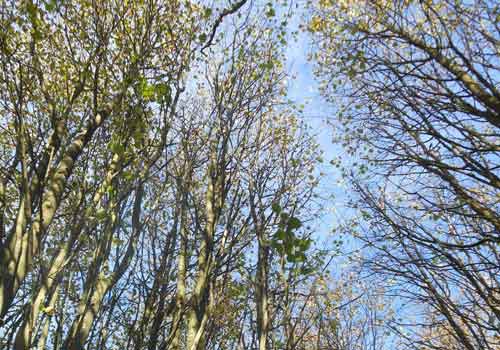 One of Britain's oldest trees, a small-leaved lime at the Forestry Commission's National Arboretum at Westonbirt, will be cut back this week as part of a tree management cycle dating back centuries.

A mix of traditional and modern techniques will be used to coppice - cut back to stumps - around 60 lime stems that have grown from one original tree thought to be over a thousand years old.

DNA tests carried out on this tree in the 1990s (at the time of the last coppice rotation) showed that the clump originates from one tree.

Experts agreed that the size of the clump and its pattern of growth meant the lime is certainly ancient, and could even be up to 2000 years old.

The practice of periodic coppicing has actually helped the tree to live this long. Vigorous new shoots form new stems from each stool once the clump has been cut back. The lime at Westonbirt Arboretum is coppiced every 20 years.

The work will take place using a combination of traditional and modern techniques, combining the use of hand tools such as bow saws and pruning saws, with more efficient chainsaws.

"Cutting back the lime stems encourages new growth and keeps the tree healthy. It is what has kept this original lime alive for so many centuries.

"Coppicing is not only good for the tree, it also benefits wildlife; particularly woodland flora as regular opening of the canopy allows sunlight to reach the woodland floor.

"Our Forestry Commission team will work with a group of professional coppicers and volunteers to carry out this important work."

Historical records show traditional coppicing methods have been used in Westonbirt Arboretum's Silk Wood since at least the 13th Century.

This lime would have originally been coppiced by those who lived in and worked in Silk Wood. Local people would have used traditional woodland skills to make a living; cutting lime, hazel and oak for everything from building materials to rope and tools.

To maintain this traditional use of coppiced material, the stems will be used by the arboretum's network of woodland workers and crafts people to make all manner of items.

There are also plans for a sculpture to be created from the material telling the story of the lime whilst the stems grow again over the coming years.

The lime can be found near to Maple Loop and the National Japanese Maple Collection, found in Westonbirt Arboretum's Silk Wood.