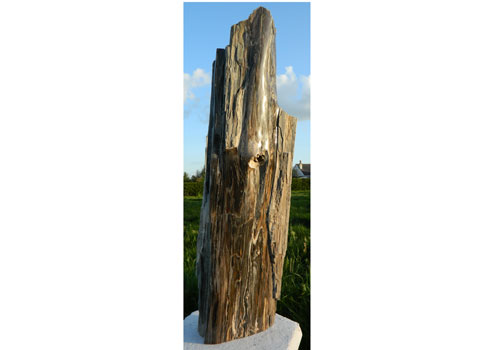 Petrified Wood is a remarkable and fascinating phenomenon; a three dimensional fossilised representation of a tree, once living and breathing yet turned completely into stone by the process of petrification, which occurs underground when the tree has fallen and becomes buried. Over a long period of time, due to the lack of oxygen and a flow of mineral-rich watery sediments in the ground, all of the organic matter is replaced with minerals while retaining the structure of the wood; preserving it in its original shape but as pure stone with all of its magnificent detail including grain structure, growth rings, knots and bark.

Petrified Wood is semi-precious and has a Mohs hardness rating of 7, the same as quartz crystal.

Petrified Wood from Jurassic Stone Ltd is one of the finest examples, far older than many of the other petrified sites in the world, believed to date between 230 and 180 million years - from the late Triassic period, when the first true mammals and first flying vertebrates evolved through the Triassic-Jurassic extinction event to the early Jurassic period, the age of the reptiles when dinosaurs became increasingly dominant. So, Petrified Wood from Jurassic Stone Ltd originates from trees that stood tall as part of a lush tropical rainforest before even the first birds took flight.

Carefully excavated by local villagers to sustain vegetation and wildlife, Jurassic Stoneâ€™s Petrified Wood is unearthed from its own private land in the Black Sea region; cleaned, collected and delivered locally by traditional donkey and cart, then shipped to the UK. Here, the extraordinary rock is selected, lapped and polished to museum standards.

Individual, original sculptures of the enchanting stone are set to be exhibited for viewing in galleries throughout the rest of 2012 with permanent collections at Nicholas Braggâ€™s Designastone workshop at Earlswood Lakes Craft Centre in the West Midlands and at Dream Bathrooms in Bicester, Oxfordshire. A sculptorâ€™s certificate of authenticity will accompany each piece.