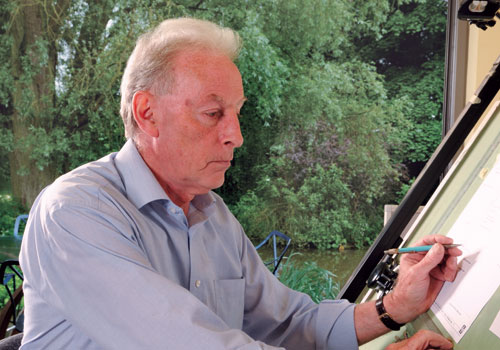 It is with very great sadness that we have to inform you that Andrew Varah died at home on Saturday 7 July after a prolonged illness. His wife Helen, their daughter Alice and his two elder daughters were with him.

Born in 1944, Andrew became a Liveryman of the Furniture Makers in 1996. He was appointed to the Bespoke Guild Mark Committee in 2001 and served for three years before becoming an outstanding Chairman of the Committee for three further years. He was elected to the Court in 2009 and in the following year he created and ran the Branching Out project on behalf of the Livery Wood Group which raised over £20,000 for the Arboretum at Castle Howard. In May 2011 he received the Company's Lifetime Achievement Award which was presented by Lord Mayor Michael Bear.

After working tirelessly for several years, Andrew was instrumental in bringing about the creation of the Furniture Designer Makers Association in 2010.

Andrew was an outstanding designer/maker for thirty-five years and was believed to be the world's only maker of 'infinity models'.

Andrew was a remarkable, inspiring, generous and unassuming man. He was a very special person as well as being a unique, gifted and humorous designer/maker whose work was exemplified by his amazing infinity models. He was a very good friend to many in the Livery and amongst designer/makers for whom he had such great enthusiasm and he had an instinctive rapport with the young. His wonderful sense of humour and generosity of spirit extended to all those with whom he came in contact.

Those who knew him will miss him very much but he will be remembered with great affection and joy. We extend our deepest sympathy to Helen and his daughters.

In this sad circumstance we are nevertheless delighted to be able to announce that the Court agreed at its meeting last week, unanimously and enthusiastically, to set up an Annual Award in Andrew's name to enable an outstanding young designer/maker to acquire additional skills and experience. The precise details have not yet been decided but will be announced in due course.

At the same meeting Andrew was made an Honorary Liveryman - the highest accolade the Furniture Makers can bestow.