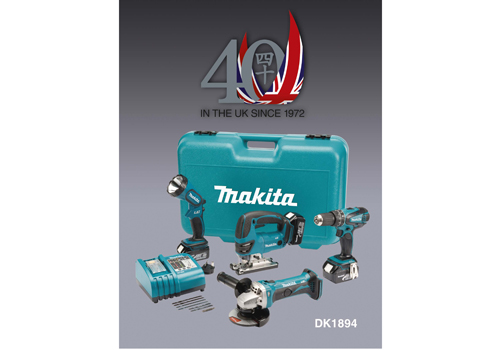 2012 marks the 40th anniversary of the opening of the UK sales office of power tool manufacturer Makita. In three years time Makita Worldwide will celebrate a century of growth since the company was formed in Anjo, Japan. Constantly increasing sales over the past 40 years sees Makita recognised today as the leading brand in the competitive industrial power toolUK market.

Since 1972 Makita has produced power tools for the professional tradesman, where innovative designs to enable construction tasks to be carried out with greater ease and accuracy are coupled with rugged reliability; essential when one is earning a livelihood. More than 450 different tools are now available from Makita UK including mains powered machines, cordless battery powered tools including the advanced Lithium-ion technology, air powered nailers and staplers, petrol engine machines for construction and the outdoor equipment horticultural machines for domestic gardeners and professional landscapers and horticulturists. An equally broad inventory of high quality accessories, such as drill bits, blades, abrasives and diamond cutting wheels, further enhances the ultimate performance of Makita tools.

Makita's history is marked by exceptional product innovations, none more valuable than Advanced Vibration Technology AVT, built into the highest powered hammer drills over the past decade to dramatically reduce the hand arm vibration risks to operators.

Two further factors are the cornerstones of Makita's market success. The establishment and continuous development of the strongest national network of professional distributors, backed by a skilled sales and demonstration force, and the total belief in training in all aspects of the selection of tools for a particular job, and the correct and safe use of the tools in active conditions. Makita's substantial investment in the purpose-built training centre at Milton Keynes reflects this philosophy.

Makita is the biggest power tool manufacturer in the UK where at Telford in Shropshire more than 1.25 million tools are made annually with 80% being exported around the world.Telford is one of 10 global manufacturing plants all working to the same exacting ISO standard.

To mark the 40th anniversary of sales in the UK Makita has launched a special edition selection of power tools and accessories especially marked with the anniversary logo.