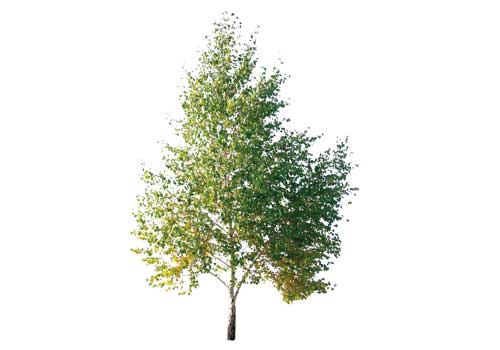 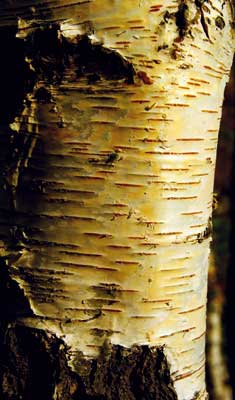 Birch belongs to the genus Betula which contains up to 60 species of trees and shrubs native to the northern hemisphere. They are typified by constantly shedding their outer bark (rind) in strips around the stem - the silver birch (Betula pendula) is a good example of this.

The bark on birches, which is usually grey or white, is characteristically marked with long horizontal lenticels that often separate into thin papery plates and is very hard to break down due to containing resinous oil. The tree itself will generally feature fine twigs and foliage with flowers forming in catkins 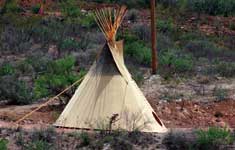 1. The bark of the paper birch was utilised by Native Americans for the construction of canoes, bowls and wigwams, and also for writing on

2. Beriozka tourist shops of the Soviet era were named after the birch tree

3. In Russia the birch is a national tree where it was once worshipped as a goddess during Green Week

4. Birch trees feature in Irish, Scottish and English folksongs and ballads in connection to death, returning from the dead, and fairies

Yellow birch (Betula alleghaniensis) has a high bending strength when air-dried. It also has high resistance to shock loads and high crushing strength, taking stain and polish well. Planing can be difficult when the grain is irregular but fine on straight grain. Watch out for cutters as yellow birch can cause a medium dulling effect, and pre-boring is required for nailing and screwing

2. Paper birch (Betula papyrifera) has medium strength for crushing and resistance to shock loads. It works well with machine and hand tools though be aware as it can chip or tear on planning. Pre-boring is advised for nailing and screwing. Again, it takes polish and staining well

3. European birch (Betula pubescens) is a heavy wood which steam-bends well, with medium resistance to shock loads. It has a moderate blunting effect on cutters and takes staining very well. Pre-boring is required for nails and screws. Great for turners 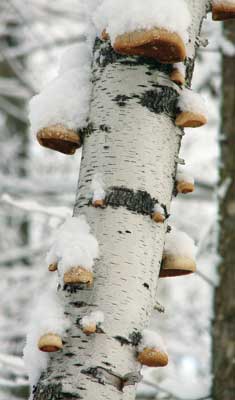 1. Birch when worked can cause dermatitis and respiratory problems - care should be taken when using it so ensure good ventilation

2. Birch is a fast growing pioneer tree which readily colonises open ground with a typical lifespan of between 60 and 90 years old

3. Although the bark is known for its white or grey colour, young trees are reddish-brown

5. Silver birch is the national tree of Finland 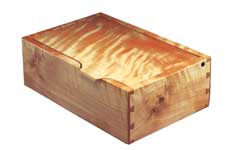 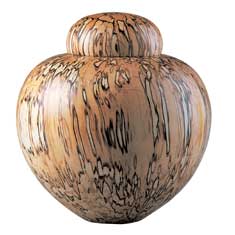 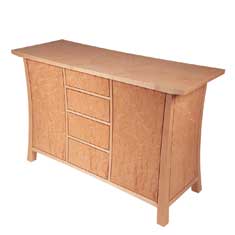 and decorative veneers. It is rotary-cut to make plywood and pulped to make writing paper 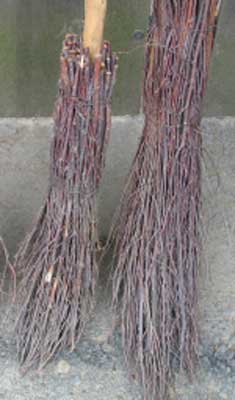 According to Trees for Life in early Celtic mythology, the birch came to symbolise renewal and purification. Beithe, the Celtic birch, is the first tree of the Ogham, the Celtic tree alphabet. It was celebrated during the festival of Samhain (what is now Halloween in Britain), the start of the Celtic year, when purification was also important. Bundles of birch twigs were used to drive out the spirits of the old year. Later this would evolve into the 'beating the bounds' ceremonies in local parishes. Gardeners still use the birch besom, or broom, to 'purify' their gardens. Besoms were also of course the archetypal witches' broomsticks, used in their shamanic flights, perhaps after the use of extracts of the fly agaric mushrooms commonly found in birchwoods.

Birch leaves are diuretic and antiseptic, and an effective remedy for cystitis and other urinary tract infections. They were also used to dissolve kidney stones and relieve rheumatism and gout. The sap (as wine or cordial) similarly prevents kidney and bladder stones, treats rheumatism, and can be used to treat skin complaints. The bark is said to ease muscle pain if applied externally.

2. Bark from the birch tree

3. The bark of paper birch was used to make canoes and wigwams

3. Birch trees can be found as far north as the Arctic

4. Yellow, paper and European birch can be used to make a variety of turned items, as well as items of furniture

Tagged in:  Tree of the Week , birch